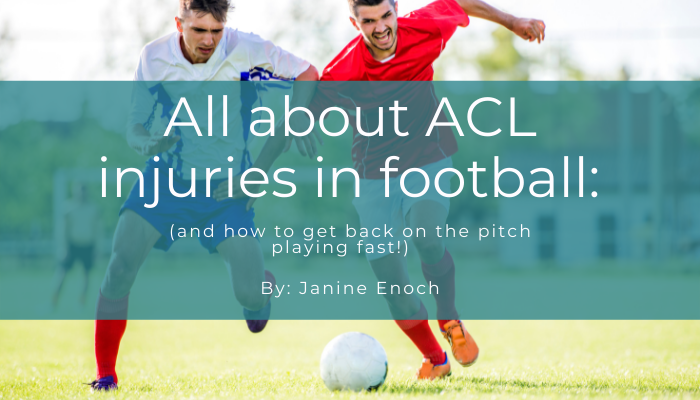 What is an anterior cruciate ligament and what does it do?

The ACL is a connective tissue band in your leg connecting your tibia (shin bone) to your femur (thigh bone).

It is a crucial ligament – physically stabilising your knee and acting as a data center in the leg with its rich and complex sensory nerve receptor supply. It acts as a beacon for your brain, sending signals about your knee’s position when you’re moving, twisting, running, or jumping. Thus, giving valuable information about the knee’s tension, stretch, and movement. Unfortunately, much of that vital information is lost when you damage the ACL, making your knee feel unsteady.

Causes of ACL tears in football

According to a recent study published in 2020 where 134 ACL injuries in elite football were examined. They found:

88% of ACL injuries in these football players were NC and IC injuries. These were caused by:

What is ‘pressing’ and ‘tackling’ in football?

Pressing means putting pressure on the ball to win it from your opponent. In contrast, tackling is interfering with the player in possession of the ball while they advance. Mechanical perturbation was identified as a significant cause of injury. Aggressive movement interactions and body distortions while players are defending or attacking (like during pressing and tackling) can cause ACL injuries.

For example, if a player’s upper body is bumped, pushed, or pulled while their lower body is fixed on the ground or performs an action, it can increase their risk of ACL injury.

The most common position in which ACL’s become injured is in a dynamic knee valgus. This is when your knee is bent, and your hip is out to the side and rotated inwards. It is a high-risk position for your knee and ACL. 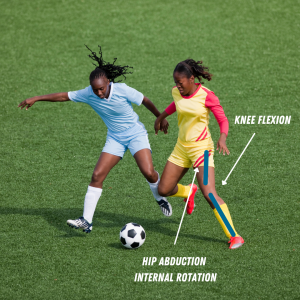 The 2020 study mentioned earlier found that 25% of all ACL injuries happened in the first 15 minutes of the match.

Another study published in 2021 found that your cognitive skills, reaction time, and processing speed are also significant factors in preventing re-injury.

Why is this good to know?

It matters because it helps us focus our treatment and prevention strategies on the right things.

In the case of ACL rehab, readiness to play, when your muscles and nervous system are in sync and alert, is more relevant than any accumulated match play fatigue.

This indicates that your ACL injury rehab should involve cognitive or brain training to achieve the best outcomes. Examples include reactive drills and small-sided football games such as gates games or possession vs. pressure games.

It’s not only about musculoskeletal and cardiovascular fitness.

Is an ACL tear, a career ending injury in Football?

A 2018 study reports that 83% of athletes return to professional sport following ACL reconstruction.

And there is a real-world example you may be familiar with.

Football pundit and Newcastle’s favourite son, Alan Shearer CBE, ruptured his ACL in a game against Leeds United on Boxing Day 1992 while playing for Blackburn Rovers. The injury occurred in the first half of the game, unbeknown to him. Nevertheless, he scored 2 goals, and his team won 3-1 in that game. After his injury, the most prolific scorer in the history of the Premier League returned in the 93-94 season to score 31 goals in 40 games. Shearer attributes his success to return to play to this “Be patient, don’t cut corners, and do everything the Physio tells you.”

How long do most players take to return to play after an ACL tear?

9 months is the usually prescribed timeframe for a return to play following an ACL tear. Virgil van Dijk, from Liverpool FC, made his return after 9 months. Still, some players take 12-18 months to get back to full play.

Return to sport should be considered carefully. The decision-making process is complex and involves multiple stakeholders, depending on your competition level.

Usually, it’s a team decision with the athlete (you) at the centre of any it all.

The “must haves” for returning to football play include:

Oh yes, even more hops than the Rapper’s delight.. -a hip, hop, the hippie, the hippie o the hip hip hop-a you don’t stop the rock.

These are a few examples of questions that may be asked by your rehab team before you can get back on the field safely:

An ACL tear does not mean relegation. Instead, a well-structured plan with clear goals and the right team behind you is a recipe for a triumphant return to the pitch.

At Vitality Physio, we have the experience, knowledge, and wisdom to take you from your ACL injury back to the game you love.

We’re here to help you get fit and strong, and prepared with renewed confidence.